The Secrets of Acceptor

Gridman (グリッドマン, Guriddoman) is the titular hero of Gridman the Hyper Agent. He is a Hyper Agent from the Hyper World who, in persuit of Khan Digifer, came across Naoto Sho and his computer, "Junk." Sensing good in Naoto, Gridman chose him as his host, and merged with him, giving him the Accepter, and upgrading "Junk", all in order to stop Khan Digifer's kaiju army from wreaking havoc on Computer World (world within computers).

The character later makes his return in Studio TRIGGER's animated adaptation/sequel SSSS.GRIDMAN, at which he chose Yuta Hibiki as his host so they can stop Khan's spiritual successor Alexis・Kerib. Yet the circumstances of his partnership with his new host contrasted that of with Naoto: Injuries he sustained from the fight against Alexis resulted Gridman split into six fragments. Whereas Gridman's master fragment resided within Tsutsudjidai's recreation of the Junk, four of the fragments spawned new Hyper Agents that become both hosts of said fragments and new assist weapons at the simulated city while the last one ended up posssessed his new partner Yuta, resulting the latter's seemed amnesia.

Gridman is a heroic being to the core, having dedicated his life to protect the innocent. While he is unable to remember his past as much as Yuta who lost his memories for some reasons, Gridman maintains his dedication to his mission, and even supportive to Yuta and fellow members of the Gridman alliance even about trivial things.

As shown in some of the radio dramas in SSSS.Gridman, Gridman will occasionally drop in on a conversation, much to the embarrassment and covering up that Yuta and others had to do when talking to people who haven't heard of Gridman.

This is Gridman's classic form, designed and given by Ippei Baba from his own CG concept of a superhero. Before Gridman can leave, the Access Code must be entered to Junk, this password is "GRIDMAN". The form is clad in Techtarian Armor which protect him from attacks and possesses numerous features such as Energy Lamp (forehead crystal/lamp that will blink should his giant form putting too much strain on Junk (the PC that powers his giant form), Radar Ear (ear-like pieces on the sides of the helmet which acts as radar to detect foes around him), Crystal Converter (Gridman's source of power), Tri-Juster (pieces on breastplate through which he emits Fixer Beam), and Gravity Metal Greaves (which enable flight). Upon regaining his original form near the end of events of SSSS.Gridman, he retains Thrusters from his Fighter forms which further improves his flight and speed.

Excluding his use of Assist Weapons and hand-to-hand combat skills, the following are special abilities Gridman can deploy on his own:

Fighter forms are downgraded versions of his original form, which much more robotic in appearance due to extra layers of armor around it. In this form, he retains some of his combat techniques and features of Techtarian Armor.

Gridman's weakest Fighter form, which sports white, green, and purple coloration. The reason of its coloration and being sluggish is due to Yuta and and the Hyper Agent's incomplete merger, and thus barely gain the access for the latter's abilities.

After Samurai Calibur optimized the Junk, Gridman is upgraded into a faster and sleeker form as his color scheme permanently changed into those of red and cyan, echoing his original form. Instead of a forceful absorption into Junk, Yuta is given the Primal Acceptor as a medium to properly merge with Gridman. Even so, this form's overall combat parameters still pale compared to his original self.

Here are forms Gridman use via. Assist Weapons

The following are combinations with his original Assist Weapons, which designed by Ippei.

Thunder Gridman is Gridman's upgraded form where God Zenon acts as a suit of armor. In this form, he can fire the Twin Driller's bore tips which can home in on the target like missiles. In addition of weaponry, the armor also greatly improve his strength and durability at the cost of degraded speed.

King Gridman is Gridman's second upgraded form accessible by use of Dyna Dragon that reconfigure itself into armor he wears. In addition of much stronger than Thunder Gridman, King Gridman armor provides Gridman greater speed and agility along with its own set of arsenal and gas mask to counteract gas-based attacks.

The following are combinations through the use of his new assist weapons, Buster Borr, Sky Vittor, and Battle Tracto Max, all of which based on God Zenon.

By combining with Battle Tracto Max Gridman gains a pair of oversized robotic fists attached on his arms and a helmet. In this form, his strength and speed drastically increased thanks to the arm's boosters. In addition of enhanced strength and power, Gridman gains the access for Tanker Cannons.

By combining with Buster Borr, Gridman gains a powerful chestplate along with a pair of shoulder-mounted drill cannons and a pair energy minigun/missile launcher hybrid. Specialized in firearm combat, Gridman gains overwhelming firepower as he also gains the access for Buster Borr's missiles in addition of shoulder cannons and energy minigun. The breastplate also endows him greater durability against enemy fire.

By combining with Sky Vitter, Gridman gains a pair of rocket greaves, a jetpack, and a helmet with HUD systems. Specialized in aerial combat, Gridman gains access of Sky Vitter's array of weaponry as well as an increase in speed and the ability of supersonic flight.

Gridman's ultimate combination where his Assist Weapons combine around him into an enormous robotic suit of armor comprised of arm platings formed by Battle Tracto Max; breastplate, helmet, and rocket greaves formed by both Buster Borr and Sky Vittor, and the crest on the breastplate formed by axe piece of Gridman Calibur. This essentially making it a combination of all his other combined forms. This form greatly bolsters the strength, speed, and durability to higher levels as well as ability to fly. However, due to Junk's limitations, Gridman and the Assist Weapons are forced to manifest at a fraction of their normal size in order to access Full Powered Gridman form, resulting the said form stands at a height comparable to Gridman's normal stature and arguably not at its fullest potential until the Junk is upgraded.

Gridman is armed with Assist Weapons, weapons created and devised by Ippei to assist Gridman in battle before completed by Gridman via. Materialization Beam in Computer World. Initially, Yuka was responsible for handling the programs until Ippei created the Assist Weapon Selector to contain and deploy them easily. With the exception of Gridman Sword, later Assist Weapons (being mechas themselves) are remotely controlled by both Ippei and Yuka through game controllers. They are also modified to become powered suits for Gridman, thus raising his ability perimeters. In the final episode, Khan Digifier invaded Junk's server and destroy all the Assist Weapons in their data forms, leaving Gridman almost defeated before Takeshi created the Grid Hyper Beam program. 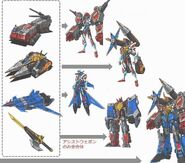 Crossover visual between SSSS.G and ULTRAMAN manga by Eiichi Shimizu and Tomohiro Shimoguchi

Community content is available under CC-BY-SA unless otherwise noted.
Advertisement